On the 18th and 19th of March, the kick off meeting by Baltic Sea Labour Forum (BSLF) for Sustainable Working Life (SWL) took place.
The European Social Fund has granted the Council of the Baltic Sea States (CBSS) 800,000 Euro for this project, whose aim is to improve working life conditions and life-long learning provisions,as well as systems and policies for elderly, in order to promote active ageing and employability. 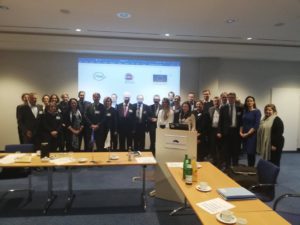 Ms Agata Ludwiczak, Deputy Head of International Permanent Secretariat from Euroregion Baltic, took part in this event as Observer, together with the other participants from different organisations namely:

from Federal Service for Labour and Employment, Russia: Korchemkina Olga;

from Ministry of Economic Affairs and Employment, Finland: Koivuneva Lippa;

Mr Hans Manzke and Dr. Anton Bauch from NORDMETALL and Mr Uwe Polkaehn and Ms Johannes Schraps on behalf of DGB Nord, welcomed all the guests and the meeting officially started. Ms Daria Akhutina presented a report on “current developments in the field of Labour and Employment: activities and ESF Project’BSLF for Sustainable Working Life”, followed by a report on the trade unions presented by Ms Irena Liepina.

The subsequent reports were presented by employer organisations from Poland, Denmark, Latvia and Russia.
Ms Sonia Buchholtz presented the Lewiatan Confederation, which is the largest employers’ organisation in Poland, with more than 4000 companies involved: “Our mission is to provide some business conditions and support the competitiveness of companies, focusing on stable economic growth, high quality legislation, jobs and social capital. In 2018 the annual GDP growth was over 5%. There is not a lack of demands, but a lack of skills workers. In Poland there are some policies for the elder citizens that change from one that emphasizes ecnomic activities, to one that emphasizes social activities; the work access for elder workers is low.”
Ms Sonia also spoke about the new retirement legislation, work and immigration.

Then Ms Christiane Miβ lbeck-Winberg, from the Confederation of Danish Employees, took the floor, talking about the current situation in Denmark: “In Denmark the percentage of unemployment is 3.8%. People come to Denmark from Romania, Germany and other European countries… on the one hand we need people to come to Europe, to come to Denmark to work, but on the other hand the nationalistic parties want to close down the Danish borders.”

Afterwards Mr Pumpins Janis, LDDK, talked about the issues in Latvia “One of the main problems in Latvia is the lack of a labour force, many people from Latvia emigrate to other countries. Latvia has the worst situation in all the EU cuntries because our population has decreased by 27% in recent years. Our priority as organization is to form labour force with competitiveness skills.”

Last but not least, Ms Olga Korchemkina, State Agency ROSTRUD, from Russia, emphasized the importance of the collaboration and cohesion between EU and Russia: “It is really interesting to see the different approaches that these two counries have, the problems are different and the approaches are different.”

In the afternoon, Bodo Bahr, Secretary General, BSPC presented the report “Norwegian priority for the next Baltic Sea Parliamentary Conference”; which was followed by the analysis made by Ms Anastasia Klonova, Norden Association, titled “Youth Employment in light of the knowledge Platform Integrate young people in NEET situation”.
A discussion was initiated on “policy recommendations on behalf of BSLF focused on social policies in light of demographic change, labour market’s needs and active ageing”. 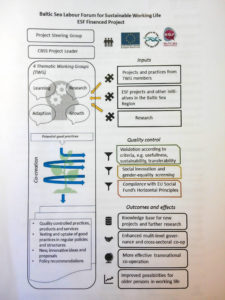 At the end of the meeting, Mr Somers Fry and Mr ChristianRåbergh underlined the role of the BSLF and BSLF/CBSS Cooperation Group on Labour.

On 12-13th June, BLSF will take part in the EUS BSR Annual Forum in Gdansk, Poland.

In the near future, the Lewiathan Confederation of Employers from Poland will be discussing their participation in the Baltic Sea Labour Forum.