BSLF Round Table meeting in Gdańsk 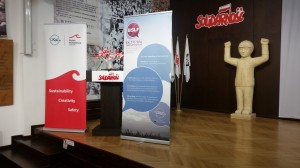 The Annual Round Table meting of the Baltic Sea Labour Forum (BSLF) took place in Gdańsk, Poland on 18th November 2015. The event was hosted by the Solidarity Trade Union at the famous BHP Hall (OHS Hall) of the Gdańsk Shipyard where in 1980 Lech Wałęsa, the leader of the shipyard workers signed the August Accord with the representatives of the government, thus paving the way for the establishment of the Solidarity Trade Union.

The annual meeting of BSLF focused on the main themes currently being tackled by the Forum ie. labour mobility and youth unemployment. Prior to the Round Table the meeting of the BSLF Steering Committee was held during the which its members finalised an official statement on labour mobility. It states that in order to facilitate cooperation in this field, the BSLF is preparing an Flagship Initiative on Labour Mobility. The statement provides a joint clear position which will serve as a base for political dialogue, project application etc. The flagship initiative will have three focus areas: 1/information for employees, employers and relevant information; 2/ fairness in the labour markets; 3/ vocational education, training, lifelong learning.

During the Round Table different initiatives supporting labour mobility were presented with particular focus on the Policy Area Education within the EU Strategy for the Baltic Sea Region. Here the support may be provided by different actors engaged in the process, including the Swedish Institute. The SI is currently developing a Baltic Leadership Programme for the PA Education which will start next year after completing relevant studies and working meetings designed to define specific goals and actors involved in the programme. Usually BLPs consist of 3-4 modules which are 3-4 days long including travel. They are less about the skills but more about bringing relevant actors to create activities that would be later implemented. The BLPs are funded by the SI.

Apart from discussions on the labour mobility issues, also the problem of youth employment and vocational training were discussed during a dedicated workshop. Also, information was provided about the available financial instruments within the current EU Financial Perspective 2014-2020, also including the Interreg Programmes such as the South Baltic or BSR. 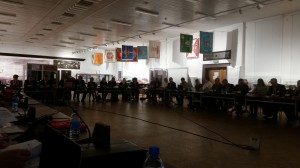 The BSLF the only cooperation body where trade union, employer organisation parliament and governmental organisation representatives work together to create sustainable regional labour markets within in the Baltic Sea Region.

To date there are 28 member organisations from 8 countries, involving the Baltic Sea Parliamentary Conference Secretariat (BSPC) and the Council of the Baltic Sea States Secretariat (CBSS). BSLF is welcoming the interest in its work and are therefore inviting interested institutions and networks from around the BSR to apply for an observer status. Nine institutions are currently involved as an observer in our Baltic Sea Labour Forum, including Euroregion Baltic.

BSLF is focusing currently on the working areas dedicated to youth employment and mobility of labour. Both subjects are of particular importance for the labour market development and consequently for the sustainable economic growth in the Baltic Sea Region.