The Euroregion Baltic Executive Board and the Youth Board meetings transpired in Radisson Blue Hotel in Klaipeda, Lithuania from 13-14th February 2019!

On 13th February, the Euroregion Baltic Executive Board meeting took place. Some of its highlights included: the presentation of the Skåne Association of Local Authorities-from Sweden-as the new ERB member, the transfer of the ERB Presidency from Denmark to Lithuania, the approval of the new Head of the Euroregion Baltic International Permanent Secretariat and the ERB Action Plan for 2019. Furthermore, the new Executive Board members were introduced, a new sequence of ERB Presidencies was proposed to start after 2020 and various reports detailing hard-earned results and plans for the future were exhibited.

The inclusion of Skåne  Association of Local Authorities is undoubtedly a very important moment in ERB history. The Association from Sweden represents the 33 most southern municipalities in Sweden. Due to the Swedish local self-government tradition, the municipalities have responsibilities in many important areas such as climate issues and water. The organization also has an office in Brussels which is participating in several working groups such as Blue Growth, Energy and Climate, Water and Digitalization.

The Skåne  Association’s interests coincide with the goals of the new Lithuanian Presidency of the Euroregion Baltic (in the picture) so, it will be interesting to see how cooperation in these subjects will evolve. The Lithuanian ERB Presidency will focus on: blue and green growth (through smart specialization tool-kit), EU Cohesion policy (by effective lobbying and focusing on the South Baltic Programme after 2020) and accessibility/ transport (through the implementation of the Interconnect Project).

These goals were also included in the ERB Action Plan for 2019. It was presented by the new President of the Euroregion Baltic, Mr Vytautas Grubliauskas. The funds, projects connected to the ERB, and success criteria were demonstrated. The new strategy involves events like the Participation Day (in the frame of the EUSBSR Annual Forum) which will take place on 11th June 2019 in Gdansk, right after the Baltic Sea Youth Camp, event that will be attended by 100 young people and representatives of the HA- Horizontal Actions like HA- Capacity Building. 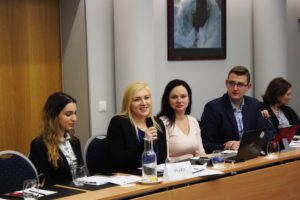 Finally and most importantly, we are glad to have Ms Magda Leszczyna-Rzucidło (in the picture) as the new Head of the ERB International Permanent Secretariat to replace Mr Sebastian Magier who spent almost a decade working dedicatedly for the Euroregion Baltic. Ms Leszczyna-Rzucidło will start her duties in April and until then, Ms Agata Ludwiczak will lead the ERB IPS. Ms Leszczyna-Rzucidło scored the highest result in the interview stage of the recruitment and also received warm recommendations during the Executive Board Meeting. We are looking forward for her arrival in the ERB IPS!

On 14th February, the Youth Board meeting took place. Ms Agata Ludwiczak, from ERB IPS, and Mr Marcin Żuchowski, from the Association of Polish Communes, presented the new Youth Strategy. The strategy is focused around 3 objectives: mobility, development and identity. In order for these objectives to be fulfilled, the use of almost 40 tools was recommended. Some of these tools include youth mobility, the Students’ Council, Youth Centers, youth media, school’s first job and others. Furthermore, there was a discussion on the future of the Youth Board which involved a variety of suggestions and requests for changes in its structure.

In conclusion, the ERB Executive Board meeting introduced certain changes of crucial importance and drew the plan for the future. On the other hand, the Youth Board meeting brought into light many of the alterations needed to be made in order to boost its influence and effectiveness. Both meetings were characterized by openness, cordiality and a sincere wish to discuss and cooperate.